Opponents of the Morrison government’s VoterID bill, currently being debated by Parliament, have regularly pointed out that some groups of voters will be disadvantaged by the new law if passed.

The argument is that some groups of electors are less likely to have the forms of identification set out in the bill, meaning they will be disproportionally represented amongst those denied access to an ordinary vote.

According to the 2016 Census, 40% of the division’s residents are Indigenous. But because remote voters are not included in the national automatic enrolment program, and because of cuts in remote indigenous enrolment programs, indigenous voters make up less than 40% of enrolled electors in Lingiari.

Turnout is low because remote Indigenous voters have little access to election day polling places used by other Australians, and because pre-poll ordinary voting is generally only available in Alice Springs, Katherine, and around Greater Darwin.

Most Indigenous votes are collected by remote mobile polling teams that travel around the electorate visiting communities for as little as one hour on a single day.

What the Bill Does

In brief, the bill will require electors to present one of the allowed forms of Id before they can be issued with ballot papers for what’s called an ordinary vote. An ordinary vote is one where ballot papers are placed directly into a ballot box on completion. These votes are counted on election night with no further checks on who cast the vote.

If an elector does not have the required Id, then another elector with Id can ‘attest’ as to who the voter is and an ordinary vote allowed. This deals with situations such as married couples turning up to vote with only one having Id.

Voters without insufficient ID will become another category of declaration vote, alongside postal, absent, provisional and out-of-division pre-polls. With declaration votes, ballot papers are placed in a declaration envelope on which the voter writes their details. Before declaration votes are counted, envelope details must be checked against the roll. This process is done in batches to try and protect the secrecy of votes on removing ballot papers from envelopes.

While no voter may be turned away, that doesn’t mean that votes will be counted. During debate last night (24 November), some government members referred to envelopes just being checked to make sure that voters have not already voted. This is not correct.

Below is a declaration vote envelope. 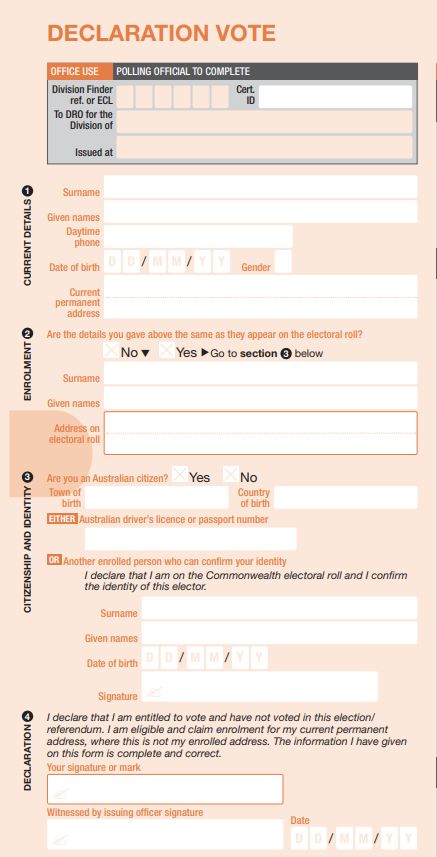 The envelope requires details like date of birth, address, driver licence number and a signature. In processing a declaration envelope, any inconsistency in these details can result in the envelope being rejected and the ballot paper being excluded from the count.

If a voter turns up to vote with a driver licence that doesn’t match their address on the electoral roll, they will still be allowed to vote. If they don’t have ID, and there is an inconsistency in their address, then the declaration vote can be rejected.

All votes cast as an ordinary vote will be counted. That is not true of declaration votes that must first pass the envelope test before they can be counted.

So while the government may say that Voter ID laws will not deny a voter being given a ballot paper, it will increase the number of voters whose vote will be excluded from the count for administrative reasons.

I have always argued that parliamentarians are happiest when the principle of legislation they support aligns with their self-interest.

And if you look at results in Lingiari at the 2019 election, you can see why the principle of the Voter ID bill and political self-interest are running in parallel.

As the chart shows, Labor currently holds Lingiari courtesy of huge support from the one third of votes collected by remote mobile teams visiting Indigenous communities.

Polling day votes and pre-poll votes taken in Alice Springs, Katherine and in and around the edges of greater Darwin, support the Coalition.

I'm not arguing that either side of the voter ID debate is acting solely on the basis of self-interest, and it is ridiculous to argue the debate is only about who wins Lingiari. But as I said, both principle and self-interest explain why Lingiari keeps getting mentioned in the debate.

Evidence from when Voter ID was used at the 2015 Queensland election suggests that maybe only 1% of voters will not have sufficient ID to cast an ordinary vote.

But there are questions the Queensland experience does not answer.

The first is whether some voters didn't turn up because they thought they needed ID, or walked away from polling places on being denied an ordinary vote.

The second is we have little idea of how many or why insufficient ID votes might have been rejected. The Electoral Commission Queensland has admitted there were some problems with voters given declaration votes having been incorrectly marked off the roll on polling day.

There is more information on how Voter ID worked at the 2014 Stafford by-election. All voters were written to and advised to bring ID along to vote. Remarkably, around 60% of voters used the letter as proof of ID, so you would hope letters weren't being stolen.

But a national 1% figure of voters lacking ID does not answer a question of how it might impact in particular electorates, and clearly Lingiari would be the Federal seat of greatest concern.