Divided Senate ballot papers and Group Voting Tickets were first introduced for Senate elections in 1984. They were later adapted for use in the four mainland states with Legislative Councils, South Australia in 1985, NSW in 1988, Western Australia in 1989 and Victoria finally in 2006.

Divided ballot papers remain in use for electing upper houses in all jurisdictions. However, group voting tickets (GVTs), allowing parties to control between-party preferences, have fallen out of favour. GVTs were abolished in NSW in 2003, for the Senate in 2016 and in South Australia in 2018. GVTs are still part of the upper house voting system in Victoria and Western Australia.

The original WA upper house ballot paper listed parties and groups vertically. Voters were given the choice of voting for groups on the left of the ballot paper, or for candidates on the right.

A sample of the divided ballot paper used for the 1988 Ascot by-election is shown below. 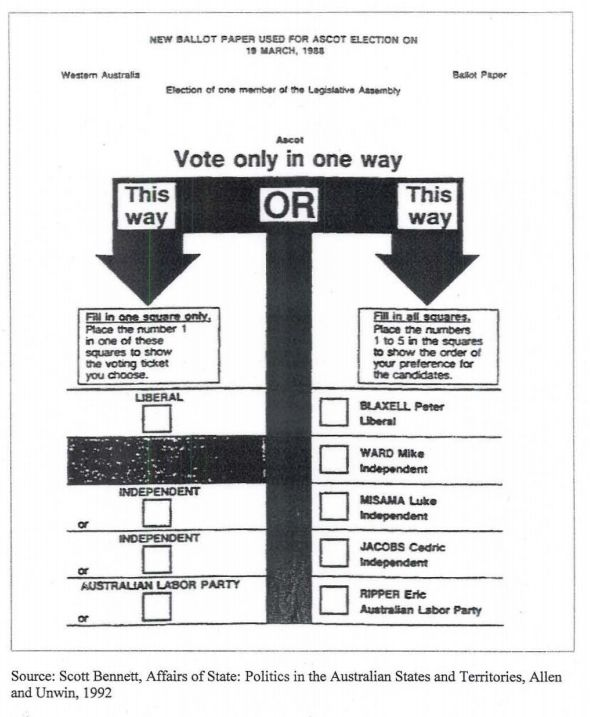 This single ticket created problems for Independents and minor party candidates that did not want to direct preferences. As in the Ascot example above, any candidate who did not lodge a ticket had the left side of the ballot paper blacked out. Anyone wanting to vote for a candidate with no ticket had to number all preferences on the right of the ballot paper, where other parties just urged voters to mark a ‘1’ in the left-hand column.

The ballot paper was used at three by-elections, for Ascot and Balga on 19 March 1988, and for Dale on 7 May. The informal vote was higher than expected, 5.11% in Ascot, 4.41% in Balga and 4.48% in Dale. In June 1988, the Dowding government repealed the provision with the support of both the Liberal and National Parties. The experiment was seen as a failure.

It was just as well it did fail. The use of GVTs for upper house elections induced more and more parties to nominate to get access to ticket votes. Complex preference harvesting arrangements discredited ticket voting, leading to their abolition in NSW, South Australia and for the Senate.

Had ticket voting been retained for lower house elections, it is certain that preference deals would have evolved in the same way. Every candidate with even a tiny vote would have been hawking their preferences round to other candidates.

In the absence of ticket voting, no party or candidate can control lower house preferences. Candidates and parties can only try and influence preferences by distributing how-to-vote material encouraging voters to complete preferences in a particular way.

The Western Australian parliament ended the experiment with lower house ticket voting, putting the power over preferences back into the hands of voters.

That was the same argument used to end the use of GVTs in NSW, South Australia and for the Senate. The question for the next government in Western Australia is whether to take the same approach to reforming the electoral system for the state’s Legislative Council.

In 2021, voters in all WA regions have only two choices when they vote in the Legislative Council – to accept the preference ticket and associated opaque preference deals of their first choice party, or number more than 50 preferences below the line without making any errors.

The asymmetry of effort in voting above versus below the line herds voters into taking the easy option and marking one square above the line. It saves time and effort.

More than 95% of voters use the above the line option, which means that the final seat in every region will be delivered into the hands of the small number of preference wranglers who arranged the deals that voters are herded into accepting.

This post is an update of one I originally published in 2008. I thought it worth updating as the original no longer has a readable version of the ballot paper.