In my last post I published an analysis of the new state electoral boundaries for Western Australia. The boundaries were drawn on one-vote one-value principles, a signature reform introduced by the Gallop government in 2005, and one that helped deliver Labor a record majority at the 2017 election. (see this post)

In 2005, Labor and the Greens could not agree on a reform model for the Legislative Council. As part of the deal for lower house reform, the Greens wanted the existing six regions retained, but with six member per region instead of the existing five and seven member regions. This left in place the three-to-one weight against Perth, but added a new bias to the system by increasing the weight of votes in Agricultural Region and Mining and Pastoral Region at the expense of South West Region. At the 2017 election, a vote in Mining and Pastoral Region carried seven times the weight of a vote in Perth, a weighting that can only increase at future elections.

The New Electoral System in 1989

Before 1989, the WA Legislative Council consisted of two-member provinces with staggered terms, one member elected at each election. Ahead of the 1989 election, the Burke Labor government pushed for a one-vote one-value electoral system in the lower house, and for the introduction of proportional representation in the upper house.

Unable to get these reforms through the Legislative Council, the Burke government compromised by cutting a deal with the National Party. The state was divided into six region, three in Perth (North, South and East Metropolitan) and three non-metropolitan regions based on land usage, South West Region, Agricultural Region, and Mining and Pastoral Region.

The non-metropolitan regions as at the 1994 redistribution are shown below. The region boundaries have undergone minor changes since. 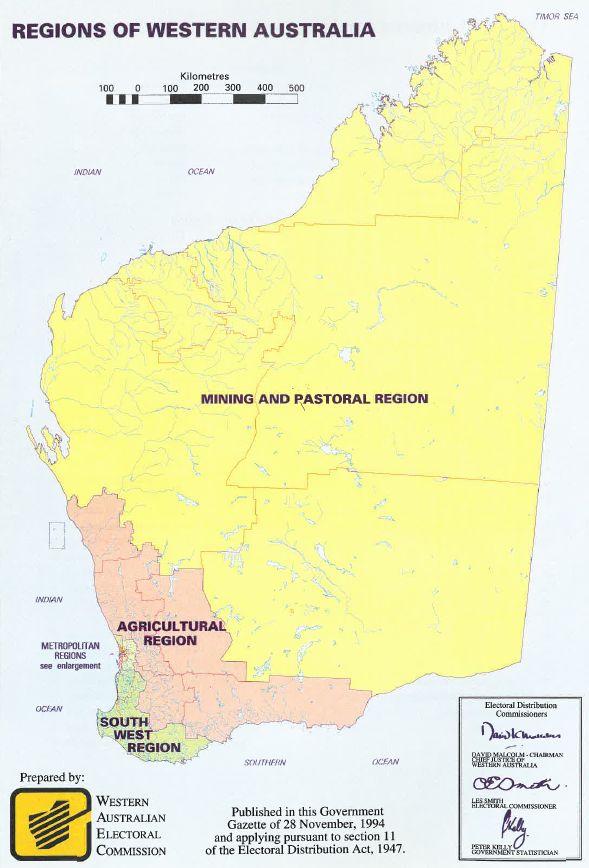 In the Assembly there were 57 seats, 34 in Perth and 23 in the rest of the state, the two areas having different quotas and an effective vote weighting of two-to-one against Perth. Country seats were divided 10 in South West, seven in Agricultural and six in Mining and Pastoral. The Labor-National deal was effective, Labor winning all six seats in Mining and Pastoral at the first election under the new system in 1989, and the Nationals winning four of the seven in Agricultural.

In the Legislative Council, despite Perth having around three-quarters of the state’s population, it was allocated only half of the seats, 17 seats with two 5-member regions and one 7-member region (North Metropolitan). The non-metropolitan seats were allocated seven to South West and five each for Agricultural Region and Mining and Pastoral Region. Rotation of members was abandoned and the entire Legislative Council faced election every four years.

Apart from the transfer of a Mining and Pastoral Assembly seat to South West in 2001, the regional system remained in place until the 2005 election.

The one-vote one-value reforms passed the WA Parliament after the 26 February 2005 election and before the newly elected Legislative Councillors took their seats on 22 May 2005. Labor had been one vote short of passing the reforms before the election, but gained the vote of Liberal turned Independent MLC Alan Cadby. Cadby had previously been a supporter of the reform but voted against them with his former party in 2001. Having been defeated for pre-selection in 2004, he became an Independent and gave his crucial vote to Labor’s reforms before the changeover of Council members.

The reforms established a state-wide quota and required all electorates to have an enrolment within 10% of the state average when drawn. A ‘large district allowance’ formula was included allowing electorates larger than 100,000 square kilometres to have fewer electors. The Legislative Assembly was increased from 57 to 59 seats, the Legislative Council from 34 to 36 with the switch to six-member regions.

The 2007 redistribution, the first under the new rules, produced 42 Perth to 17 non-metropolitan seats. Eight seats were added to Perth, two new seats plus an effective transfer of six seats from regional areas. The balance became 43-16 after a further seat was transferred to Perth by the 2015 redistribution. Agricultural Region was reduced from seven to four Assembly seats. Mining and Pastoral initially retained the five seats it had held since 2001, reduced to four seats at the 2017 election.

The representational impact of the changes is shown in Chart 1 below, showing the effective weight of non-metropolitan votes since 1989 against the value (set at one) of a vote recorded in Perth. The green line is for the Legislative Assembly, and it dips dramatically between 2005 and 2008 with the introduction of one-vote one value boundaries. The Legislative Council’s vote weight continued to slowly increase.

Chart 2 below shows the lower house region by region weights since 1989 and highlights that all three non-metropolitan regions had their vote weights reduced after the one-vote one-value reforms, the large district allowance allowing the Mining and Pastoral region to retain greater weight.

As mentioned above, no agreement could be reached in 2005 on Legislative Council electoral reform. The upper house retained the imbalance where three-quarters of voters living in Perth elected the same number of MLCs as the one quarter living outside of Perth. The size of the Council was increased from 34 to 36.

The number of members elected per region was changed, from the previous mix of five and seven-member regions to a standard six members per region. This change had two important consequences.

First, it is generally accepted that odd numbers should be used in elections for multi-member regions. With the former five or seven-member regions, a party with close to 50% of the vote could win a majority of the seats in the region. For six-member regions, a party with 43% of the vote elects three of the six members, but a party must do significantly better than 50% to elect four of six members. Electing an even number of members makes it more likely a region will be politically deadlocked.

Tasmania elected six members per electorate for its House of Assembly until a series of post-war elections produced deadlocks. The state switched to odd-number elections after a 1957 Select Committee report. The ACT Legislative Assembly, along with upper houses in NSW, Victoria and South Australia, elect an odd number of members. So did the Senate until 1984 when six was adopted, a decision that has tended to deadlock the Senate since.

Since the regional proportional representation system was introduced in 1989, the weight applying to non-metropolitan votes has increased from 2.85 in 1989 to 3.07 in 2017. (See Chart 1) This trend reflects the faster growth rate of Perth compared to the rest of the state.

Chart 1 showed the big decline in lower house vote weights between 2005 and 2008, and Chart 2 highlighted how this has occurred in all three non-metropolitan region. But the same region by region analysis shows a very different picture in the Legislative Council, as shown by Chart 3.

Where for the lower house vote weights have converged since 2005, in the upper house the differences between the three non-metropolitan regions have diverged. The initial widening was caused by the switch to six-member regions in 2008, the further widening by population trends.

As a comparison, the vote weight of South Australia to New South Wales in the Senate is 4.5, and a huge 13.3 for Tasmania compared to New South wales.

At the 2017 election, Perth votes represented 75.4% of all votes in the state and elected only 50% of the Legislative Council. South-West Region represented 14.4% of votes and elected six members compared to 12 members elected by the combined 10.2% of votes in Agricultural Region and Mining and Pastoral Region.

Population growth outside of Perth is concentrated in South West Region, and the Electoral Act defines the regions based on land usage. As a result, the imbalance between Perth and the rest of the state, and especially between the South West and other non-metropolitan regions, can only worsen into the future.

One-vote one-value boundaries mean the election of government in Western Australia will increasingly be determined by the contest in suburban Perth. This provides an argument for maintaining some level of weighted representation in the Legislative Council.

One-vote one-value has the advantage of a simple principle, equality of representation based on population. That has been slightly modified in WA by allowing square kilometres into the formula via the large district allowance.

If you believe that some form of vote weightage is needed in the upper house, the question is what level to adopt? The weight adopted in 1989 was 2.8-to-one, but that has now passed three-to-one and will increase in the future.

But it is the growing imbalance between South West Region and the other two non-metropolitan regions justified?

Given Agricultural Region and Mining and Pastoral Region elect the majority of representatives for the National Party, One Nation and the Shooters, Fishers and Farmers Party, there will be opposition from the crossbench to changing the regions.

It may be that change will be driven by the Labor and Liberal Parties seeing common purpose, in the same way Labor and the Nationals embraced in the 1980s.

If the major parties combine, they will have the numbers to overcome the constitutional hurdle of requiring an absolute majority in the Council.

The fly in the ointment is that section 73 of the Constitution Act (1889) requires that any decrease in the size of the Legislative Council requires a referendum. That would rule out simply combining the two remote regions and giving all regions seven members, as that would reduce the Council from 36 to 35 members.

At the 2017 WA elections, group voting tickets gave a huge boost to two parties that attracted very few votes, Fluoride Free WA in East Metropolitan Region, and Flux the System! in Mining and Pastoral Region. In both cases, the leakage of below the line preferences prevented preference harvesting putting both parties into the Legislative Council.

Western Australia may not be so lucky in 2021. The number of groups more than doubled at the 2017 election to an average 21 groups per region as more minor parties joined the preference harvesting game.

There is nothing to stop the number of groups increasing again in 2021, and what we know from elections elsewhere is that the more groups on the ballot paper, the more people vote above the line, the more votes in the preference harvesting pool, and greater the likelihood that a little known party will leap frog over higher polling parties to win a seat.

The Senate and South Australia have both followed NSW in abolishing group voting tickets, providing an example of what both Victoria and Western Australia should do.

It is something that should be done for the Senate as well, something I might return to in a future post.

Source This post is based on my forward to Peter Kennedy’s book “Tales From Boom Town – Western Australian Premiers from Brand to McGowan”, 2nd edition, UWA Publishing 2019