The 2018 South Australian election saw a record vote for minor parties. This was largely due to the campaign by Nick Xenophon and his SA-Best party, polling 14.2% in the House of Assembly, a creditable 18.4% in the 26 seats it contested. The failure of the party to poll as strongly as published polling well out from the election suggested, or to elect a member to the Assembly, saw its campaign labelled a failure by political commentators.

The release of preference flow data by the SA Electoral Commission provides an opportunity to analyse preference flows against party preference recommendations. Several unique features in the conduct of SA House of Assembly elections allows the comparison of preference flows with how-to-votes lodged by candidates and displayed in voting compartments.

The Display of How-to-votes on South Australian Voting Screens

Across Australia, (Tasmania and the ACT excepted), how-to-vote material is distributed outside polling places by volunteers working for candidates and parties. The material is designed to attract first preferences, to help ensure ballot papers are completed correctly, and in some instances to influence preferences. (See my previous post on why candidates distribute how-to-vote material.)

Something different occurs in South Australia. The distributed how-to-vote material is still removed, but a special provision of the SA Electoral Act allows candidates to register how-to-votes for display in the voting compartments. The how-to-votes are displayed on the screen in front of voters, as shown below. 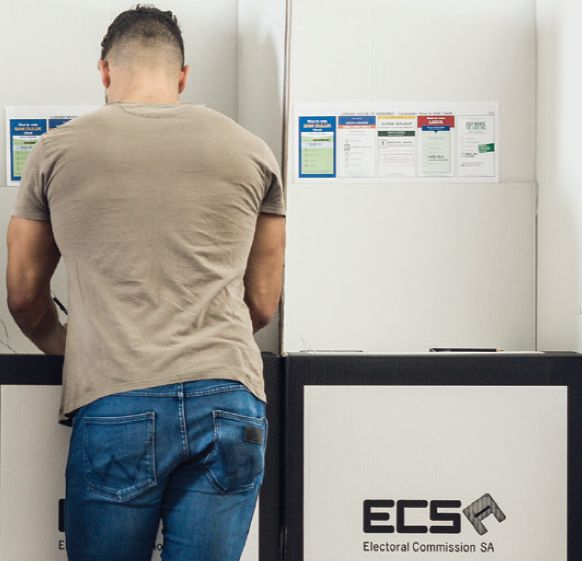 The HTVs for the district of Adelaide at the 2018 South Australian election are shown below.

How-to-votes (HTVs) are displayed left to right and in ballot position order, in rows if there are more than five candidates. Candidates and parties are limited to basic text and colour with pictures not allowed. Candidates can lodge 1-only HTVs, or split HTVs, as long as the how-to-vote indicates that all boxes must be numbered. Candidates can choose to leave party affiliations off the list of candidates. Candidates that don’t lodge a HTV have their name shown in ballot position order with the message “no how-to-vote lodged”.

This widespread access to HTVs makes South Australia a  useful test case in assessing the impact of HTVs. In other jurisdictions, without knowledge of where HTVs were distributed, it is difficult to assess their effectiveness.

Preference Distributions show the transfers of ballot papers from excluded to continuing candidates as each candidate is excluded in ascending order of vote. This produces an inverse tree diagram as preferences flow from their first preference source to their two-candidate preferred destination.

The table below shows the formal distribution of preferences for Adelaide at the 2018 South Australian election.

From this table, we know that of the 946 votes for Price (Dignity Party), 192 had second preference for Chapley (Labor), 205 for Sanderson (Liberal), and 549 for Simms (Green). What we don’t know is the third preference of those 549 ballot papers transferred to Simms, that preference being the final destination choice of Price voters between Chapley and Sanderson.

What we need is preference flow data, counts of preferences that are tallied by their source, that is first preferences, and their destination, which of the final two candidates received the preferences.

Thankfully, South Australia is one of the few states where this information can be obtained. The preference flow data is not part of the SA Electoral Commission’s formal results reporting process, but can be accessed well after the election for research purposes.

An example of this data is shown in the table below. The data is derived from the same Adelaide ballot papers that produced the distribution of preferences, but the tallying is by pairings of candidate first preference and candidate destination preference.

From the flow data, we know that 63.2% of Price’s votes flowed to Labor, and 36.8% to Liberal. We can also work out that of the 549 Price votes with second preference for Simms, 406 gave a third preference to Chapley, and 143 to Sanderson.

Similarly, the flow data allows us to know that of the 2,739 first preference votes for Simms, 82.9% flowed to Labor as preferences, and 17.1% to the Liberal candidate.

In this post I’m going to compare the preference flow data with the HTVs lodged by each party. As we know most voters had access to these HTVs on the screen in front of them, the flow data gives us a measure of the influence of HTV preference recommendations.

I define HTV concordance as where a  completed ballot paper exactly matches the HTV for the candidate that received the ballot paper’s first preference.

The SA Electoral Commission conducts research on concordance. In a survey of 17 districts at the 2018 election, the Commission found 37.7% of ballot papers matched lodged HTVs. This was compared to survey figures of  42.8% in 2014 and 42.1% in 2010. The Commission did not break down the data by party in 2018.

The Commission did publish concordance detail by party in 2010 and 2014. The data for the four main parties contesting those two elections is shown in Table 1.

The above data disproves claims that voters blindly follow how-to-votes. The overwhelming majority of voters at both elections had how-to-vote recommendations in front of them, but less than half of voters followed them.

That still leaves open the question of whether voters were influenced by the how-to-votes. For that, let me turn to analysing the 2018 preference flow data.

The table below shows the total of two-party preferred preference flows by party.

The Greens lodged 36 HTVs with a preference recommendation for Labor over Liberal, six with no recommendation and in five districts did not lodge a HTV.

The Australian Conservatives lodged 26 HTVs recommending preferences for the Liberal candidate, five with recommended preferences to Labor and two with split HTVs.

Dignity lodged HTVs in 18 districts with a preference recommendation for Labor, and in another 12 districts recommended preferences to Liberal.

As the successor party to Family First, the Australian Conservatives inherited its predecessor’s habit of directing preferences to Labor in a small number of SA seats, usually to socially conservative members of Labor’s Right faction.

Preferences were recommended to Labor in Florey, Lee, Playford, Port Adelaide and Ramsay, and split in Light and Newland.

With a supporter base less driven by ideological fervour than the Greens or Australian Conservatives, and with a lower first preference vote, random factors and voter’s own choice produced weaker flows of preferences for the Dignity Party. The gap in flows was only 6.5% between seats with a Labor recommendation and those with Liberal recommendation.

In only five districts did Dignity preferences favour the Liberal Party, and in two of those the recommendation had been to Labor.

With criminal charges over Mount Gambier Independent Troy Bell, Labor recommended preferences for the Liberal candidate and 53.2% of Labor voters followed that recommendation.

Preference flow data for excluded Liberal candidates was captured in three districts. Two were Labor-SA Best contests, Giles and Taylor, and the third was the Labor-Independent contest in Florey. The Liberal Party recommended preferences against Labor in all three contests.

There were five electorates where the Greens made preference recommendations in Liberal-SA Bests contests.

Interestingly the Green preference flows to Labor from the same ballot papers were Chaffey 64.4%, Finniss 73.8%, Heysen 82.6%, Kavel 77.5% and Mackillop 66.9%. This suggests Green voters might have cared more about their preferences reaching Labor than any choosing between other parties.

Interestingly, only 55.6% of Green preferences reached Labor first in Frome, much lower than reached Brock. Two-factors were at play here. First, the Greens issued a 1-only how-to-vote. Second, the Liberals benefited from the donkey vote. Perhaps Green voters cared little after preferencing Brock, knowing full well he would be in the final two-candidate contest rather than Labor.

Overall it appears that how-to-votes had only limited impact on how voters filled in their ballot papers, and mixed influence on how voters completed their preferences.

The concordance data shows clearly that voters do not blindly follow how to vote cards. Less than half of voters transcribed the sample HTV recommendations from the voting screen on to their ballot papers.

For the Greens and Dignity voters, HTV recommendations had only marginal impact on how voters completed their ballot papers. Australian Conservative voters seem to have been swayed more by preference recommendations in the limited number of districts where preferences were recommended for Labor.

For Green voters, there were much stronger flows of preferences to Labor in the two-party contest against the Liberal Party than was produced by the choice between Liberal-SA Best candidates. That, and the flows in Frome, suggest that maybe Green voters cared more about higher and more ideologically defined choices than they did about preferences further down the ballot paper..