For the last three decades I’ve been producing statistical publications on Western Australian elections and redistributions for the WA Parliamentary Library.

My latest in the series, summarising the results of the 2021 WA election in March, has just been published by the Library.

You can find the full series and the 2021 publication at this link.

Most of the publication is tables and statistics. Inside this post I’ve included the publication’s introduction where I set out the statistical highlights (if you are a Labor supporter) or lowlights (for Liberal supporters) from the 2021 results.

• Labor won 42 of the 43 seats in the Perth metropolitan area, seven of eight in South West Region, three of four in Mining and Pastoral and one of four in Agricultural. The Labor Party won the traditional Liberal seats of Churchlands, Nedlands and South Perth for the first time. The only seat the Liberal Party retained in Perth was Cottesloe. Labor won 12 of 18 Legislative Council seats in Perth, and 10 of 18 in non-metropolitan regions. Labor won three of the six Council seats in Agricultural Region for the first time.

• Since Labor’s defeat on the re-election of the Barnett government in 2013, Labor’s first preference vote has risen 26.8 percentage points from 33.1% to 59.9%. The two-party preferred swing over two elections has been 27%, and Labor has gained 32 seats in lifting its representation in the Legislative Assembly from 21 to 53 seats.

• Labor also won 22 of the 36 seats in the Legislative Council in 2021, a gain of eight seats. This delivered the Labor Party an upper house majority for the first time in its history. Labor’s first preference vote in the Council was even higher than in the Assembly at 60.3%, up 19.9 percentage points since 2017.

• Premier Mark McGowan won his seat of Rockingham with a remarkable 82.8% of the first preference vote and 87.7% after preferences. Both figures were the highest in the state. Labor
recorded more than 70% of the two-party preferred vote in 35 of the Assembly’s 59 seats.

• To win the 2025 election, the Liberal and National Parties need to gain 24 seats on a uniform swing of 23.4 percentage points. A copy of the new and very one-sided electoral pendulum is shown below.

• The Liberal Party’s support fell further from its record low in 2017, down 9.9 percentage points to just 21.3%. The party was reduced from 13 seats to just two, fewer than the four seats won by the National Party. For the first time since 1943, the Liberal Party finished with fewer seats than Nationals. (The two parties were known as Nationalist and Country Party in 1943).

• Of the 59 members in the old Legislative Assembly, 40 were re-elected, 10 defeated and nine retired. Thirty-four of Labor’s 40 sitting MLAs were re-elected and six retired to be replaced by new Labor members. There were 13 new Labor members representing seats gained at the election, including Darling Range which was re-gained after being lost at a 2018 by-election.

• Only two Liberal MLAs were re-elected, eight were defeated, and three members retired with their seats lost to Labor. Of the six National MLAs, four were re-elected and two defeated, including Geraldton MLA Ian Blayney who had switched from the Liberal Party in 2019.

• Of the 36 new Legislative Councillors, 19 were re-elected (including two Labor members who switched region) and there were 17 new members. Of the 17 departing members, six did not contest
the election and 11 members were defeated. The defeats included all nine cross bench members. Of the 17 new members, five retained seats held by their party in the previous Council, while 12
were changes in party representation.

• The Greens lost all four Legislative Council seats won in 2017 but gained a seat in South Metropolitan. One Nation failed to retain the three seats the party won in 2017, and the Liberal
Democrats and Shooters, Fishers and Farmers lost the single Council seats each won in 2017.

• Two new parties entered the Council in 2021, Legalise Cannabis Western Australia winning a seat in both East Metropolitan and South West Regions, and the Daylight Saving Party achieving a
remarkable victory in Mining and Pastoral Region.

• Wilson Tucker (Daylight Saving Party) won his seat despite polling only 98 votes, 95 above-the-line group ticket votes, three below-the-line, with the party’s number two candidate polling zero votes. Of the 12 groups whose above-the-line preferences formed part of Tucker’s final vote, 10 recorded more first preference votes than the Daylight Saving Party. More than two-thirds of the party’s final tally came from just three parties, Legalise Cannabis WA, the Greens and the Shooters Fishers and Farmers. More than half of the tally came from the Greens and Shooters Fishers and Farmers.

• The control of preferences achieved through group voting tickets was also highlighted by victory of Sophia Moermond (Legalise Cannabis) in South West Region. Labor began the count with 114,713 votes, just 1,710 votes short of a fourth quota. Labor’s vote increased by a net 777 votes during the count, most of that increase due to below-the-line preferences received on the exclusion of the final Green candidate. In contrast the vote for Legalise Cannabis increased nearly seven-fold from 4,531 to 30,724. The party received 25,519 votes as preferences via group voting tickets from 12 other groups, compared to just 674 below-the-line preferences.

Here’s a copy of the new electoral pendulum. 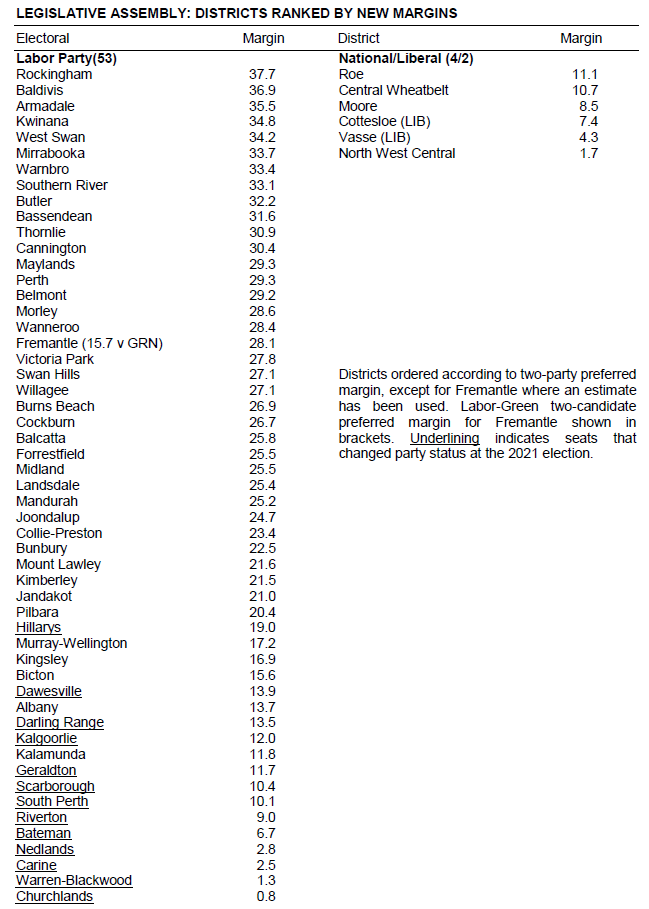