John Alexander’s Retirement opens up the contest in Bennelong

The announcement today that Liberal MP for Bennelong John Alexander will retire at the 2022 election prompts an obvious question – will it hurt Liberal prospects in the seat?

It is strange to suggest that a seat with a Liberal margin of 6.9%, that has been won by Labor only once in its 73 years of existence, could be put as risk by Alexander’s resignation.

But that Labor victory in 2007, when Maxine McKew defeated Prime Minister John Howard, lives on as one of the most remarkable moments in Australian election night history.

Mention Bennelong and Labor true believers dream the seat can deliver another magic moment for them.

But how vulnerable is Bennelong? Here’s my mini-guide to the seat.

John Alexander is a former professional tennis player whose playing career extended from the late 1960s to the mid-1980s, winning seven singles titles and 27 doubles titles. His highest world ranking was number eight and he twice reached the semi-finals of the Australian Open. Alexander was also one of Australia’s youngest Davis Cup representatives, was captain of the Australian Federation Cup team, a regular championship commentator for Australian and British networks, and also appeared as a referee in the mid-1990s TV series ‘Gladiators’. Alexander joined the Liberal Party to unsuccessfully contest pre-selection for the 2009 Bradfield by-election, later winning endorsement for Bennelong and defeating Labor’s Maxine McKew at the 2010 election. Alexander was easily re-elected in 2013 and 2016, but in late 2017 was caught up in the dual citizenship imbroglio, having inherited British citizenship from his father. Despite some polls indicating he could lose the seat, Alexander was easily re-elected at a December 2017 by-election. Alexander was re-elected again in 2019 though with a 2.8% swing against him.

Bennelong covers 60 sq.km on Sydney’s lower north shore, including all of Ryde Council and smaller areas from Hornsby and Parramatta councils. It stretches along the Parramatta River from Gladesville to Ermington, extending north to the Lane Cover River and the M2. From east to west, it includes parts of Gladesville, as well as Ryde, Eastwood, Epping and parts of Carlingford, Beecroft and Ermington. The electorate also includes Macquarie University and the business estate at Macquarie Park.

Bennelong was one of the seats created with the enlargement of the Parliament in 1949. It is named after a local Aboriginal befriended by Governor Arthur Phillip when Sydney was first settled.

When Howard first won Bennelong, his home at Wollstonecraft was in the electorate. It was removed by the 1977 redistribution, and Bennelong continued to drift westward over the next three decades, losing Lane Cove Council in 1993 and Hunters Hill in 2001. This westward shift removed strong Liberal voting territory, constantly replaced by more socially mixed areas to the west. Demographic change was also underway, with traditional Liberal territory in suburbs like Eastwood becoming more ethnically mixed.

Three decades of this change slowly undermined the Liberal hold on Bennelong and played their part in Howard’s defeat at the 2007 election, when he became only the second Australian Prime Minister to lose both government and their seat in Parliament. Howard was defeated by former ABC journalist Maxine McKew, her victory becoming the iconic moment of election night for Labor supporters.

McKew’s hold on Bennelong was to be brief. At the 2010 election she was challenged by former tennis professional and commentator John Alexander, who won the seat after a swing of 4.5%. Alexander added another 4.7% to his margin in 2013, despite Labor having recruited a high profile candidate in Jason Yat-Sen Li.

Alexander added another 2% to his margin at the 2016 election, but was one of a number of MPs who fell foul of Section 44 of the Constitution. Forced to a by-election in December 2017, Alexander was re-elected despite a 5% swing to Labor. He had faced a vigorous campaign against him by Labor’s candidate, former NSW Premier Kristina Keneally. There was a swing back to Labor at the 2019 election after Labor nominated another high profile candidate in former AMA President Dr Brian Owler.

There were Liberal Party majorities recorded in 36 of the 41 polling places used at the 2019 election. The range of results was relatively small, the lowest Liberal vote 42.7% at Morling College in Macquarie Park, the best 65.9% at Putney Public School. The Liberal Party two-party preferred vote was 55.2% on polling day, 58.0% with pre-poll and 66.4% with postal votes.

Changing Boundaries and Past Results

Bennelong has been untouched by the last two redistributions, so the 2022 election will be contested using the same boundaries that witnessed John Howard's defeat in 2007.

The map below shows the electorate's drift westward over the last four decades. The electorate was based on the lower North Shore and Hunters Hill when first won by John Howard, while these days the electorate is dominated by the Ryde City Council area.

The steady westward shift of Bennelong shown in the map is reflected in the decline in Bennelong's Liberal margin. By John Howard's final years as MP, Bennelong had become a seat only just on the Liberal side of the party's state-wide two-party vote. When the Liberal tide went all the way out in 2007, Bennelong ended up briefly on the Labor side of the political ledger.

John Alexander has restored the Liberal margin in Bennelong, even winning a swing in his favour at the 2016 election as the rest of the state swung to Labor. Alexander lost around half of his margin at the December 2017 Bennelong by-election, some of which was not regained in 2019. 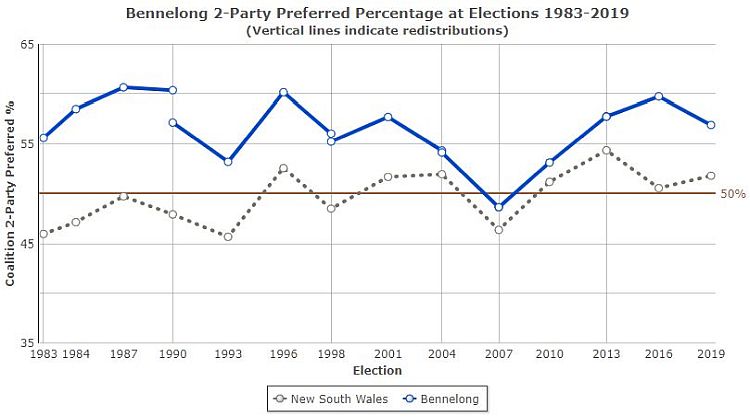