Is Increasing the Membership Requirement to Register Political Parties Justified?

The government’s proposed changes to party registration rules, released last week, will increase the number of members required to register a political party from 500 to 1,500. Understandably this proposal has attracted criticism, especially from the small parties that will now have to recruit more members.

I posted on Thursday about this and other proposed changes to the Commonwealth Electoral Act.

Is this just an attack on small parties, or is it a justifiable attempt to make Senate ballot papers easier for voters to read and understand, and for the Australian Electoral Commission (AEC) to print and count?

The 1,500 member rule was proposed by the Commonwealth Parliament’s Joint Standing Committee on Electoral Matters (JSCEM) after the 2013 Senate election. It was one element of a reform proposal for the Senate’s electoral system. The package’s main feature was the abolition of group voting tickets (GVTs), ending party control over between-party preferences. Voters were given a new option to express preferences for parties in the party voting squares ‘above the line’ on the ballot paper, while voting for candidates remained available ‘below the line’. Preferences were made optional beyond a suggested minimum number.

GVTs had encouraged a tactic known as “preference harvesting” that allowed parties to achieve victory from only a tiny fraction of the required vote quota. This led to a rapid increase in party registrations and Senate nominations as parties joined the preference lottery for seats. 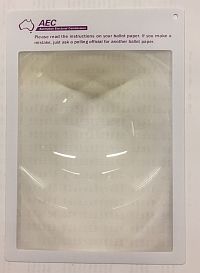 The increase in nominations caused ballot papers to reach their maximum printable width and forced the Australian Electoral Commission (AEC) to reduce font size. This made ballot papers less readable and resulted in the AEC making magnifying sheets available so voters could read their ballot paper. (See image)

The difficulty of reading and understanding these giant ballot Senate ballot papers led to confusion. At the 2013 NSW half-Senate election, 44 parties/groups nominated, and each was entitled to a column on the one metre wide ballot paper. Columns had to be narrowed, forcing party names to be split over several lines, resulting in many voters confusing the “Liberal Democrats” in column A with the much better known “Liberals & Nationals” in column Y.

The increase in members for party registration was dropped when the Senate electoral reform package was legislated ahead of the 2016 election, The abolition of GVTs was expected on its own to reduce nominations over time. The graph below shows the number of groups on NSW Senate ballot papers at elections since 1984, the year the current ballot was adopted, and the average number of groups across the six states. The numbers peaked at the last election using GVTs in 2013.

The number of columns on Senate ballot papers has declined since the changes were introduced. NSW Senate ballot paper columns declined from 44 in 2013, to 41 at the 2016 double dissolution election, and 35 at the 2019 election. Nominations may have decline, but voters are still left trying to understand a complex ballot paper. Vast numbers of names makes it difficult for a voter to find the parties they know amongst others on the ballot paper, especially when deciding preferences. Then there is the added difficulty of manipulating a one-metre wide ballot paper in a 600mm wide voting partition.

In my previous post, I quoted Chief Justice Gleeson from his judgement in the 2004 Mulholland case that decided the 500 member registration requirement was constitutionally valid. That logic in that ruling suggests the High Court would be unlikely to invalidate an increase to 1,500 members.

Gleeson wrote that minimum nominators and nomination deposits "are well-known forms of regulating candidature at elections which have never been regarded as infringing the electors’ right of choice, or as involving unreasonable discrimination. A requirement that, to be eligible to be treated as a political party for the purposes of the Act, a group must have some minimum level of public support, is not materially different." Justice Gleeson noted the number 500 is to an extent arbitrary, but not outside the range of reasonable choices available to parliament.

Registering as a political party delivers two very significant advantages. First, it allows the party's name to be printed next to its candidates on ballot papers. Second, it allows a party to nominate candidates without the need for 100 nominators per candidate.

Past experience has shown that a good name can attract votes. Well-known preference 'whisperer' Glenn Druery has stated that adding "marijuana", "cannabis" or "sex" to a party name can deliver you a percent or two of extra votes. I'd back this claim from my experience covering elections, especially for a party listed at the left hand end of a Senate ballot paper.

If you need 200 nominators for a Senate contest, and 100 for each House seat, is a minimum membership of 500 enough to be granted access to central nomination? It seems a very low figure for the power granted to each party. Even more so for parties registered under the name of a sitting House member or Senator, the path used to register Fraser Anning's Conservative National Party for the 2019 election.

It is also low compared to the numbers required to register in each of the states, NSW requiring 750, Victoria, Queensland and Western Australia 500, South Australia 350 and Tasmania 100. The states also require much greater proof of membership than is required by the AEC.

The JSCEM report that recommended the increase in members also suggested another form of party registration that would only apply to registrations in a single state. A lower membership requirement would be set with the power of central nomination limited to that state. The JSCEM report did not canvas further details and the proposal has not re-surfaced since.

In the end, party access to central nomination means party registration is only one step removed from the use of nominators to regulate the nomination of Independent candidates. There is no question about the principle, just a practical question of how many.

There is nothing magical about the 500 membership number, or 1,500. But it is my opinion that given the ease with which parties can nominate candidates in comparison to the hurdle faced by Independents, there is justification for introducing a higher membership threshold.

After all, it is evident from Senate results at the 2019 Senate election that voters are not craving the quantity of parties offered on ballot papers. Voter support for some parties is so low, you have to ask whether voters would notice if they weren't there.

Performance of Minor/Micro Parties at the 2019 Senate Election

The graph below is based on party vote share in each state at the 2019 Senate election. This covers a total of 131 party groups across the six states. I have excluded the small fields in the two territories, along with Independent groups, Ungrouped columns, and Labor and Coalition groups. The bars show the number party groups within the percentage vote range shown on the left.

Of the 131 party groups included in the above graph, 81 attracted less than 1% support, and another 27 between 1% and 2%. Excluding the Greens, One Nation and the United Australia Party, only seven party groups across the country polled more than 2% of the vote. Only the Jacqui Lambie Network in Tasmania polled more than 5%, reaching 8.9%.

The 81 party groups attracting less than 1% of the vote polled 6.4% of the vote in total. The 108 party groups with less than 2% totalled 11.9%. Voters supporting those parties did not end up unrepresented. Preferential voting meant most of these votes were directed to other parties by each voter's choice of preferences. If there had been fewer parties, voters would still have had a choice of the other parties to which they directed preferences.

The graph below shows the percentage vote for all the groups included in the previous graph, along with the major parties. A log scale on % vote has been used to separate the low polling parties. If you are using a computer with a mouse, you can hover over points to see how each party polled in each state.

Some may say it is undemocratic to deny potential candidates easy access to appearing on the ballot paper. Against this, we have always had nominator requirements and nomination deposits to regulate access. Setting a minimum number of members to register a political party is exactly the same mechanism. The question is whether the membership level is too low in comparison to the tougher hurdle set for independents.

In my view the current rules allow too many candidates with minimal support to appear on Senate ballot papers. Perhaps the current high number is a legacy of the old GVT system when some low polling parties fluked election. The numbers nominating have already dropped since the new Senate system was introduced and may drop further. I'm not sure they will, which is why a debate on the minimum number of members a party needs is worth having.

Elections are a process by which electors voting together return the most preferred candidates as representatives in Parliament. Past Senate elections have shown that when ballot papers become unwieldy, the ballot paper and the voting process interfere with the way voters make their choices. If random ballot draw, font size and confusion over party names interfere with the conduct of the election, then steps should be taken to make it easier for voters to understand the candidate and party options available to them.

At half-Senate elections, it doesn't matter how many parties and candidates are on the ballot paper, there are still only six positions to be filled. As the data on 2019 results show, there are only a small range of parties who attract votes and have any chance of election. Will voters be disadvantaged if the clutter of parties with no hope of victory were cleared out by a tougher test on party registration?

In my view no. The 1984 choice of 500 members as the requirement to register a party was essentially arbitrary. All states that have followed the federal registration route have eventually increased the number required, or adopted much tougher proof requirements on voters being members of their party.

Increasing the minimum members required for registration is likely to reduce the number of parties contesting the next Senate election. As I've pointed out, more than half of all parties attract less than 1% support. If imposing a tougher membership test sieves out some of these parties with little electoral support, the only thing most voters will notice is that they are being given a smaller and more manageable Senate ballot paper than they've seen in the past.

14 thoughts on “Is Increasing the Membership Requirement to Register Political Parties Justified?”