How the 2019 UK Election Count Will Unfold

Australians following the UK election count on Friday (Australian time) will be watching a process that is familiar in broad outline, but strangely alien in detail.

The electoral systems of Australia and the United Kingdom may have a mid-19th century common ancestor, but elections in the two countries have since evolved into separate species.

The UK’s electoral processes are essential unchanged since 1918, the first UK election held with manhood suffrage and a single day for polling.

In Australia election night is about analysing the results of individual polling places as they report their results, unpicking the figures to work out the winner.

In the United Kingdom there are no progressive results. Results in the 650 constituencies will revealed as final figures, one by one, through the night with every constituency declared by lunchtime on Friday.

Early on it is all about the exit poll, theatrically revealed as the clock strikes 10pm. From then it is a process of modifying the prediction based on early declarations until there enough results from various parts of the country to confirm or overturn the exit poll prediction.

Voting in the United Kingdom is not like in Australia

Voting is voluntary at UK elections and uses simple majority or ‘first past the post’ voting. There are no preferences, no progressive figures released, counting is completed on the night, and the candidate with the most votes is declared winner on the night.

By convention, elections have been held on a Thursday since 1935. Polling stations are open from seven in the morning till ten at night. Every elector has a designated polling place where their name appears on the roll and they can vote. It is not possible to vote at any other polling place.

Postal votes can be arranged but must be returned in time to be counted on election night. Voters can also arrange a proxy vote, designating someone to vote on their behalf on polling day. There is no pre-poll voting and no absent voting.

In Australia votes are counted in polling places. This is not the process in the UK. Instead, ballot boxes are transported unopened, along with associated paperwork, to a central counting centre.

This process takes time, which is why it takes several hours before constituencies start to declare.

How the Count Unfolds

The delay in official results means that exit polls play a greater role in UK election coverages. For the past decade, media organisations have pooled their resources to conduct a single exit poll supervised by the master of UK elections, Professor Sir John Curtice of Strathclyde University.

The exit poll is released on the stroke of 10pm as polls close, 9am in eastern Australia.

It will then be at least an hour before there are any official results, and around three hours before the vast bulk of constituencies begin to declare.

The first constituencies to declare are usually geographically small meaning ballot boxes can reach the count centre more quickly. They also tend to have lower enrolments and lower turnouts, meaning there are fewer ballot papers to count. They are also usually very safe seats, so scrutineering is less intense.

The graph below shows the expected declaration times for the 2019 UK election. The time shown is Eastern Australian Summer Time, which is GMT plus 11.

It will be five hours before results in half the constituencies have declared. Without local government elections on the same day, counting is expected to be much quicker than in 2010 and 2015 (see graph below). It is expected that 80% of constituencies will be declared by 4am GMT, 3pm in eastern Australia. 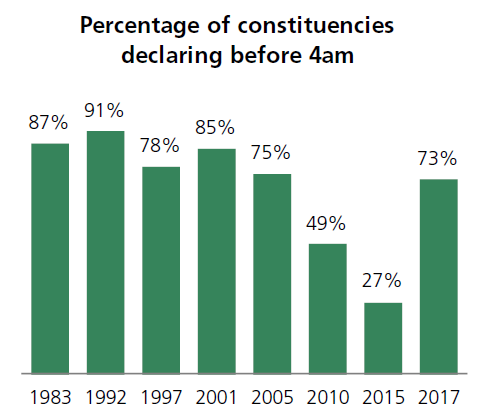 Traditionally, it is the smaller Labour held electorates that declare earlier in the evening, larger rural and Conservative voting districts reporting much later. The declarations by party and time from the 2017 election are shown below. Times shown are GMT.

Voting at UK elections is voluntary and is expected to be in the range 65-70% in 2019. The graph below plots turnout at elections since 1979.

Turnout plummeted to 59.4% on the re-election of Blair government in 2001 but has risen at each election since. Low turnout is often viewed as a measure of political trust so the low turnout in 2001 generated considerable angst, though it may simply have reflected calm economic and political times.

There are questions whether turnout will rise or fall in 2019. Holding an election in December may make voting difficult in colder and stormier parts of the UK, especially for older and less mobile voters.

Against this, Professor Sir John Curtice makes the point that this election will be with a new electoral register that came into force on 1 December. Local councils who maintain the roll have purged the roll of people who have moved or died in the last year. A cleaner roll lowers the denominator in turnout calculations, boosting the turnout percentage.

The rise on turnout over the last two decades may also reflect the increased use of postal voting.

The graph below shows in increase in postal voting, a rise that stems from a change in electoral law.


The law was changed in 2001 to allow postal votes on demand. Electors no longer needed to state a reason for applying for a postal vote, or to obtain attestation of illness (etc.) from a medical practitioner or employer. As a result, the number of postal votes at general elections rose from 800,000 before the change to around 7.2 million in 2017.
Tags:electionsunitied kingdom

1 thought on “How the 2019 UK Election Count Will Unfold”