(Update 3 July – the determination by the Australian Electoral Commissioner has been published confirming that Victoria will gain a seat and Western Australia and the Northern Territory lose seats. Details here.)

The Australian Bureau of Statistic’s national population report, released this morning, confirms the expected changes to state and territory representation for the next election.

The statistics confirm that Victoria will gain a 39th seat in the House of Representatives, Western Australia will lose the 16th seat it gained in 2016, and the Northern Territory will lose the second member it has elected since 2001.

The statistics in this morning’s report, for the December 2019 quarter, will now be used by the Australian Electoral Commissioner to make a formal determination on 3 July setting down the number of members to be elected from each state and territory at the next election.

When implemented, the changes will reduce the size of the House of Representatives from 151 to 150 seats and begin the process of electoral boundary re-drawing in Victoria and Western Australia. In the case of the Northern Territory, the existing seats of Lingiari and Solomon will be merged as a single seat with revived name Northern Territory.

However, a bill has been moved in the Senate designed to save the Northern Territory’s second seat. While the Constitution determines the allocation of members to states, representation for the territories is determined by legislation and can be changed by parliament.

Update – the table below has been updated with the Electoral Commissioner’s official determination.

Note: the above table and notes below have been updated based on the official release of the Australian Electoral Commission’s determination.

Under the formula, Tasmania would only be entitled to three seats but is guaranteed five seats by Section 24 of the Constitution.

Both territories can have a statistical error margin applied to their quotients to determine eligibility. The application of error margin was not enough to allow the Northern Territory to retain its second seat.

In the introduction to this post, I mentioned my previous post on Territory entitlement to House of Representatives seats.

In the post I put forward two methods of allocating seats discussed in United State’s literature on the apportionment of seats to states.

Under the Huntington-Hill method, currently used for US apportionments, the Northern Territory’s quotient would be above the required 1.4142 and the ACT’s above 2.4495.

Under my preferred Dean’s method, designed to allocate seats based on minimising the difference between average population per member and the national quota, the Northern Territory would need to be above 1.3333 quotas and the ACT 2.4000.

Reducing from 16 to 15 seats will have a massive impact on WA electoral boundaries. The table below shows variation from quota for the 16 current seats based on the new 15 seat quota of 111,700 in current enrolments.

Seats have been broken up into Country, North Perth (ie north of the Swan) and South Perth. Pearce is shown as a mixed seat as it crosses the Darling Range to include the Avon Valley. Hasluck is also listed as mixed as it runs along the escarpment covering areas roughly north and south of the Swan.

When the new boundaries are drawn, all electorates must be within 10% of the quota, but also within 3.5% of the projected quota in 3.5 years time. When released at the time of the redistribution, the narrow projected quota will have greater impact on drawing the boundaries than the current enrolment.

My rough guess on the above numbers is that Pearce is highly likely to lose its rural areas in the Avon Valley to shore up Durack and O’Connor. In southern Perth, Canning may also lose its more rural end and become more urban. 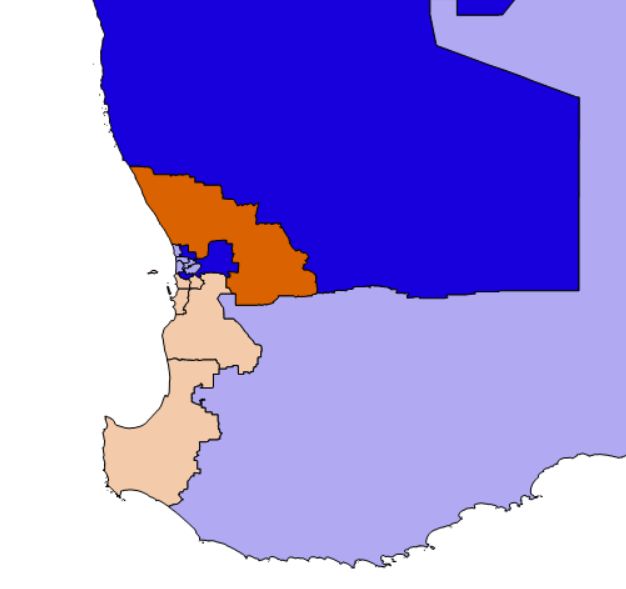 Durack in dark blue and O’Conner in light blue (though my blogging software has turned it mauve) both need to gain voters, most likely from Pearce (dark orange). Forrest based on Bunbury and Canning on Mandurah are also in the 0-5% under range.

Which brings me to the second map for Perth. 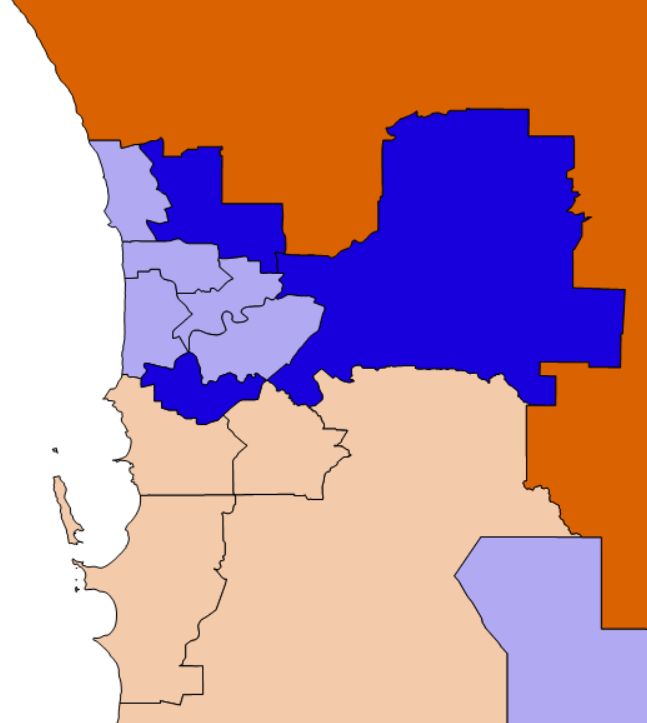 Three seats are more than 10% under, Cowan in the north, Hasluck in the east and Tangney south of the Swan The other four north Perth seats are also 5-10% under, as is Swan south of the river, while Fremantle, Burt, Canning and Brand are all 0-5% under.

Everything in North Perth can be dealt with by unlocking urban parts of Pearce (orange). Pearce includes all the beach suburbs north of Burns Beach as well as rapidly growing Ellenbrook in the Swan Valley. If the rural parts of Pearce are removed, what’s left can’t include both the northern beaches and Ellenbrook as this would have too much population growth in one seat. Cowan, Stirling and Moore could move north to swallow the northern beaches, leaving Pearce to be based on Ellenbrook, the Darling Range suburbs and Guilford.

That would leave one of Hasluck, Burt or maybe Tangney to be abolished. My guess on a last on first off basis is that the name Burt would disappear.

However, the boundary changes in this process would be enormous, and my guesses are not based on projected enrolments. Whichever seat is abolished, at least half of Perth’s seats will undergo massive change, altering their political complexion.

Redistributing Victoria will also produce major boundary changes, though for different reasons. Victoria was redistributed only three years ago, so there are no obvious hotspots where a new electorate can be carved from others. Rather, boundaries will start being drawn from the rural corners of the state, then along Port Phillip Bay and the Yarra (electorates rarely cross the Yarra), and successive nips of excess population will create a new electorate, probably somewhere in north-west Melbourne.

But fitting in a new electorate will produce much more extensive changes than were caused by the 2017/18 redistribution.

The map below shows the over and under enrolments in rural Victoria based on a new 39 seat quota. Orange is >6% over, paler orange 3-6% over, light blue 0-3% over, and dark blue is under the new quota. 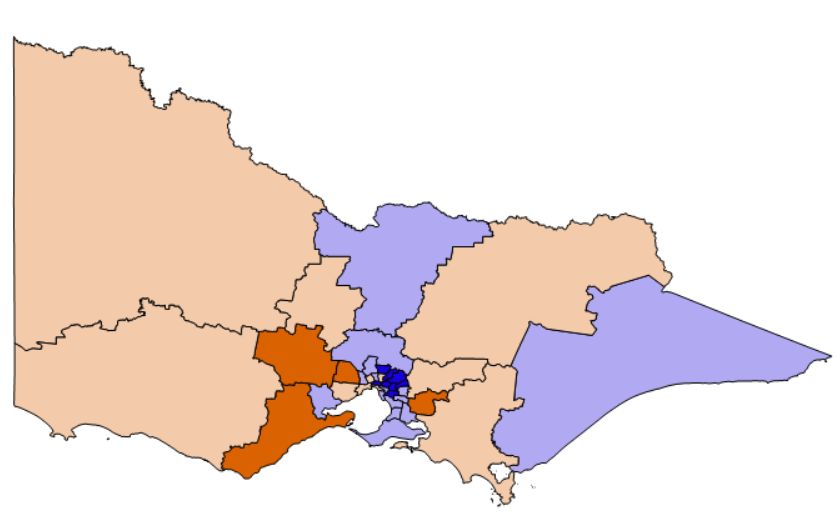 For the Liberal Party there is a problem in Eastern Melbourne as shown below. 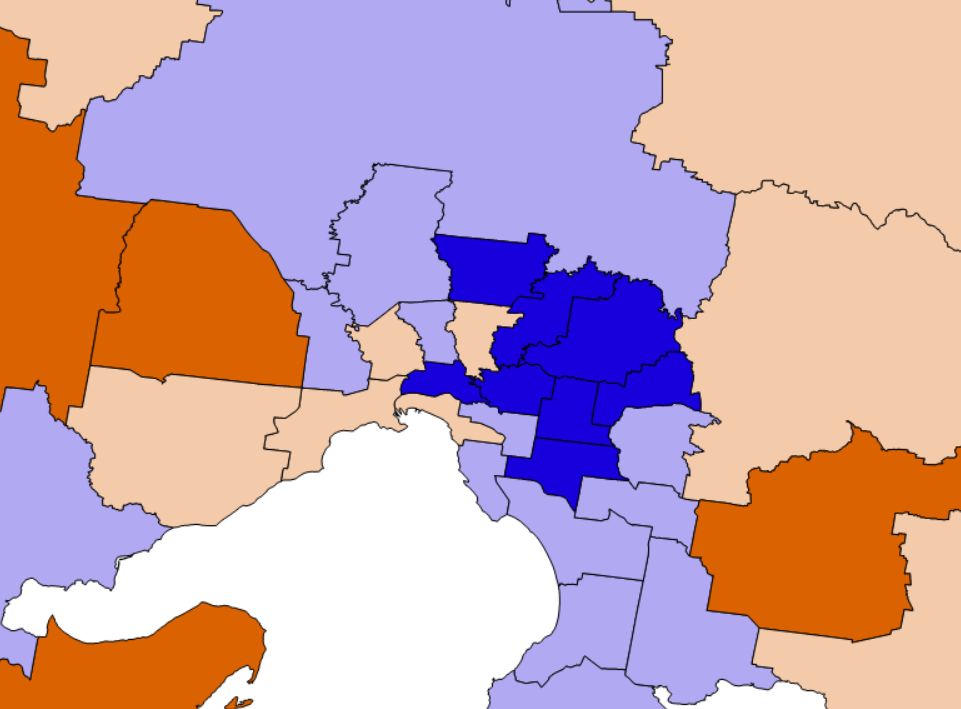 The Liberal seats of Kooyong, Chisholm, Deakin and Menzies are all under quota, as are the Green seat of Melbourne plus Labor’s Scullin, Jaga Jaga and Hotham. All the light blue seats are 0-3% over quota and light orange seats 3-6% over-quota.

The projected enrolment statistics used in drawing the boundaries will amplify the discrepancies between seats. Everything in eastern Melbourne will need to expand, and that is likely to soak up a lot of the excess in the growth corridor in south-east Melbourne.

Everything points to a new seat being drawn in Melbourne north-west, but achieving that will involve a lot of other seats shifting around.

The table below shows the current enrolment and % variation from the new 39 seat enrolment quota. You can sort the statistics by electorate name or variation.