This is the first of several posts I will do in the run up to the Federal election, expected to be held in May.

These posts will draw on material from my soon-to-be-published election guide guide for the ABC.

My posts on this site won’t be about the key seats that will decide the election. Rather I will concentrate on seats of political science interest, where the 2019 election produced a peculiar result, or where there are significant long term shifts in party support.

My first post on Capricornia fits both these criteria. The 2019 election result was well out of line with past results in the seat. The question is whether the 2019 result in Capricornia was caused by the issues that swirled around the 2019 campaign, or was the result a longer term trend that is undermining Labor support in the seat.

Capricornia is a Central Queensland seat that stretches along the coast from Rockhampton and Yeppoon in the south, to Sarina and the southern suburbs of Mackay in the north. It then extends inland to include major mining centres such as Collinsville, Moranbah, Dysart and Clermont. The electorate still includes significant agricultural and pastoral districts, but the region’s economy and workforce are increasingly dominated by the mining industry and associated transport and export facilities. The electorate is named after the Tropic of Capricorn which the electorate straddles. Covers 90,903 square kilometres.

The seat has existed since Federation and for most of its history has been held by Labor. In the last century it has been held by the non-Labor parties for 28 years and the Labor Party for 72. Between 1961 and 2013 it left the Labor fold only twice and then for single terms on the landslide defeat of Labor governments in 1975 and 1996. In 2013 Michelle Landry became the third National MP elected on the landslide defeat of a Labor government, but in Landry’s case, one victory has turned into three. Landry was only narrowly re-elected in 2016, but the collapse of Labor support in central Queensland at the 2019 election pushed her margin into double figures.

The graph below has plotted Labor rather than Coalition two-party preferred vote to better highlight how dramatic the swing was against Labor and to the Coalition in 2019. As already noted above, Capricornia is a traditional Labor seat. Until the 2019 election, Labor’s two-party preferred vote in Capricornia was always higher than its state-wide vote. As the graph shows, even when Labor lost Capricornia at the 1996, 2013 and 2016 elections, Labor’s two-party vote still tracked higher than its state vote.

But the collapse in Labor support in 2019 was unprecedented, an 11.8% swing resulting in Labor’s two-party vote in Capricornia falling below its state vote. There were similar dramatic swing in neighbouring Flynn, Dawson and Herbert. These seats are dominated by wealth generated through the coal mining industry. The sharp decline in Labor vote in these Central Queensland seats, and in the NSW mining seat of Hunter, has been highlighted as being caused by voters in mining seats abandoning Labor over climate change policy. Tax policy has also been important in mining seats in the past. The trend was probably made worse in Queensland by the high-profile Stop Adani Convoy during the campaign. It highlights the difficulty Labor had in 2019 with trying to craft a climate change policy that could appeal to voters in both urban and regional seats. 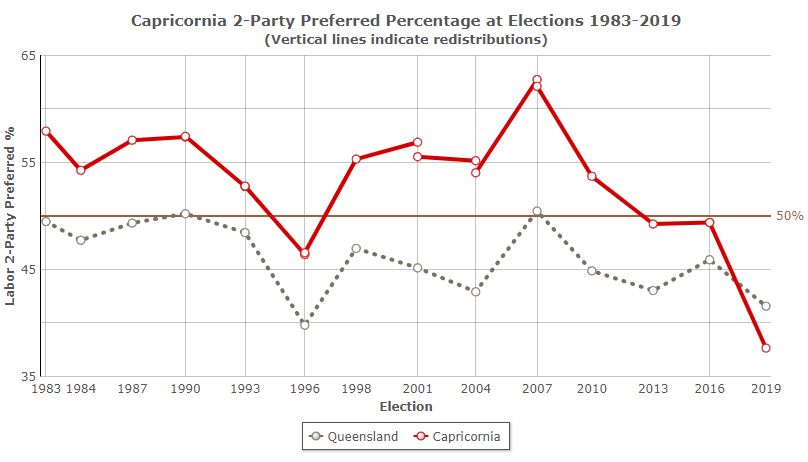 What happened in Capricornia over recent elections shows up more clearly when you look at first preference support. Due to difference in candidature at different election, I’ve accumulated support for One Nation, Katter’s Australia Party, Palmer United Party and United Australia Party into a single total. The combined vote for these parties outpolled Labor in 2019, matching the collapse in Labor’s primary vote. 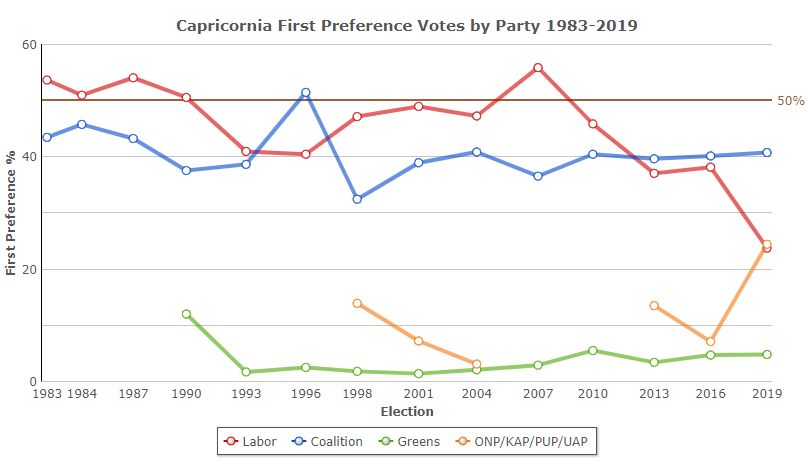 Over four elections from 2010 to 2019, Labor’s first preference vote halved in Capricornia but LNP support barely moved. Third party support rose from 13.1% to 35.6% and the proportion of that vote flowing to the LNP as preferences lifted from 42.7% to 61.0%. The bar chart below breaks down the vote source for Labor and LNP two-party preferred vote over the last four elections and shows the complex origin of the two-party preferred swing to the Coalition in 2019.

In a seat recording an 11.8% two-party swing, you would expect to see at least part of that swing appear as a shift between the major parties in first preference support. That didn't happen in Capricornia where the net first preference swing was from Labor to third parties with preference flows creating the two-party swing. The static first preference result for the LNP was probably a net no-change cancelling out gains from Labor and losses to third parties. But that so many votes were flowing around between parties against long term trends suggests a great deal of volatility. A volatility that may not be confined to one election alone.

Capricornia is the most extreme example of this phenomena, but it occurred in many seat at the 2019 election, especially in Queensland. Labor had a net loss of considerable first preference support, but the LNP first preference vote did not change significantly.

Preferences by party in 2019 are shown below. One Nation polled 17.0% and its preferences flowed 70.8% to the LNP, and the LNP also received more than two-thirds of preferences from the United Australia Party, Katter's Australian Party and Fraser Anning's Conservative National Party. Previously One Nation and Palmer United preference flows to the LNP were 10-15% lower.

The question in 2022 is what will happen to this third party vote? Will some of it drift back to Labor and the LNP as first preferences? Will the strong anti-Labor trend of preferences revert to previous weaker flows? If the flows to the LNP do weaken, it may not change the result in Capricornia, but there are other seats, in Queensland and elsewhere, where a change in non-Green preference flows could hurt the Coalition.

And will the change in flows come about through the different issues in play at the 2022 election?

In 2019 it was saturation advertising against Labor's tax policies and "the Bill you can't afford". Clive Palmer's huge advertising spend attacking Labor had far more impact on the result than his party's vote and preferences. Not only did it drive people away from voting for Labor, it importantly drove them away from preferencing Labor. Mind you, there is rarely smoke without fire, and it was Labor's policies in 2019 that opened Labor to attacks by the Coalition and Clive Palmer.

But what are the issues in 2022? Clive Palmer and various right-wing parties have been active in opposing vaccine mandates, an issue that vaccination rates suggest is of interest to only a small part of the electorate. It is an issue that may not generate the same anti-Labor mood as the issues of 2019.

With a margin of 12.4%, Capricornia should not be in play at the 2022 election. Against this, the result in 2019 looks like an outlier based on past results.

But perhaps Capricornia in 2019 is like Hughes in 1996, a one election swing shifting a seat at a new political equilibrium. In 1996 Hughes had the highest average income of any Labor-held seat outside Canberra. But the electorate had the nation's highest proportion of tradesman. In an era when out-sourcing and privatisation were major issues driving public policy, the political swing point of Hughes shifted at one election.

The 2022 result should tell us whether a similar switch has occurred in Capricornia at one election, or whether the 2019 result was an aberration.