The ACT uses the same Hare-Clark electoral system as Tasmania, but differences in the way voters use their ballot papers means that election counts can unfold differently.

The difference starts with the ballot paper.

The example ACT ballot paper below highlights the similarities and the differences between Hare-Clark and Senate voting. 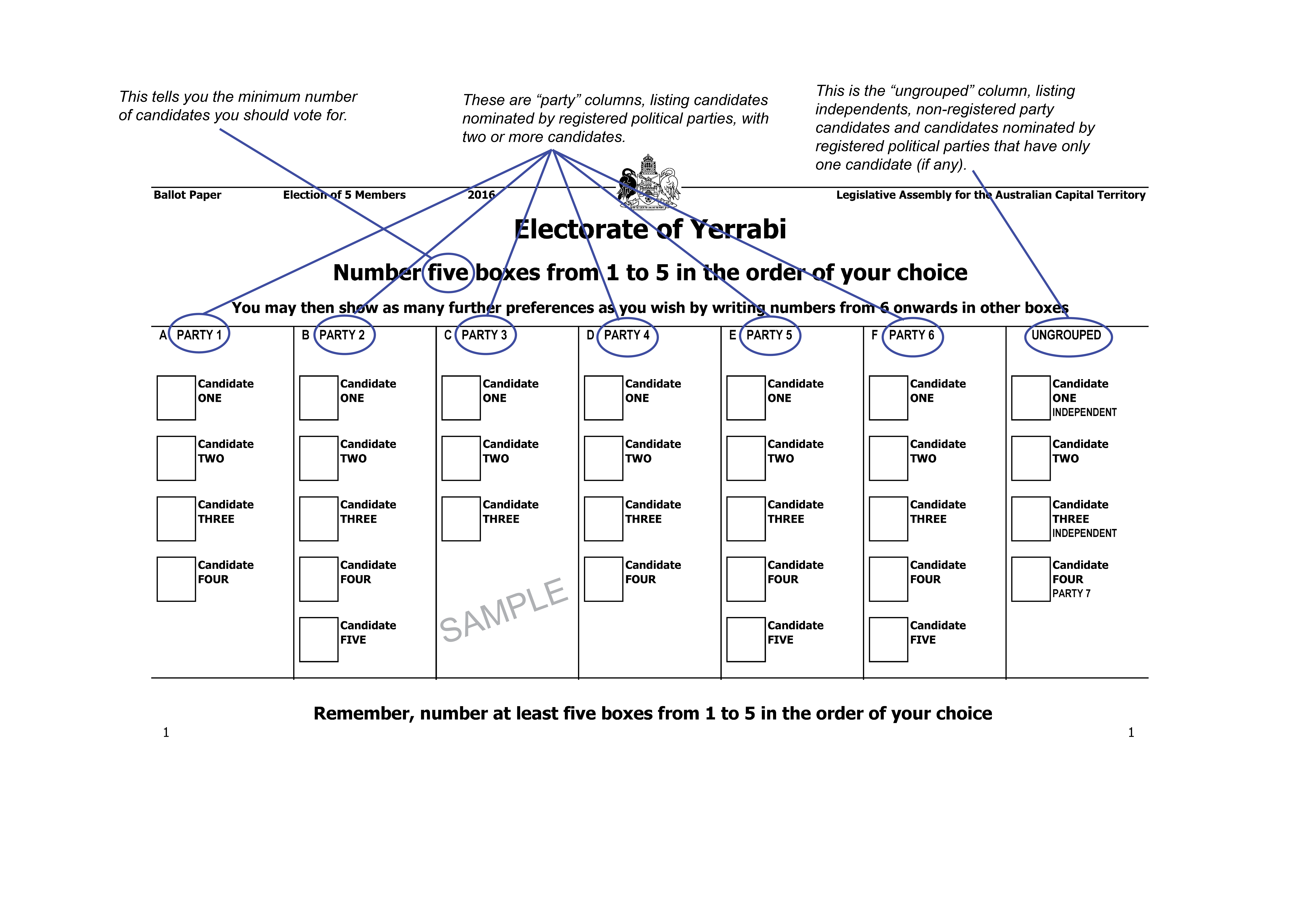 Candidates appear grouped by party in columns in a fixed order left to right across the ballot paper, as they do on Senate ballot papers. The major difference is the lack of the Senate’s ‘above the line’ voting option. You cannot use one box to vote the party ticket in Hare-Clark. You must enter your list of five preferences for individual candidates.

More than 90% of Senate voters use the ‘above the line’ voting option and so adopt the party’s list of candidates in the order they are printed. It means that the order in which a party’s candidates are elected is determined by the internal pre-selection processes of the party. It’s why the battle for position on the ticket is hotly contested.

The ACT has many more rotations because it has a much higher incidence of what is termed ‘linear’ voting.

I devoted a much longer article to ACT linear voting in this 2012 blog post so won’t go too much into the detail here.

A linear vote is where a voter simply numbers top to bottom down a party’s list of candidates. A research report by the Tasmanian Electoral Commission quoted the rate of linear voting in the ACT at 22.6% at the 1998 ACT election compared to 8.3% at the 2006 Tasmanian state election.

The 1998 ACT election may have been a particularly perverse example, as I explain in my 2012 blog post, but the point remains that more ACT voters tend to vote the party ticket as printed on their ballot paper compared to Tasmanian voters. Hence the higher number of rotations in the ACT to ensure all preferences from linear votes are randomised, not just second preferences.

Why ACT linear voting is higher is largely attributed to history and geography.

Tasmania has used Hare-Clark for a century. It is a state of geographic regions where the ACT is a city-state. Tasmania has local government where the ACT Legislative Assembly is a local government body on steroids. There is much greater opportunity for Tasmanian election candidates to have a significant public profile before they contest a state election. There is local media covering local contests in Tasmania but not in the ACT.

For these reasons, first time ACT candidates tend to have a lower personal profile than Tasmanian candidates, and few ACT candidates apart from party leaders develop a significant profile.

There is also the fact many ACT residents are in Canberra because they work for the Federal government and their focus is understandably on the broader national canvas. For federally focused Canberrans, the ACT Legislative Assembly is treated in the same way voters in the states treat voting at local government elections.

The net effect is that compared to Tasmanian elections, ACT party votes are more evenly distributed across a party’s candidates, and party preference flows between candidates are also more even.

Except in the case of party leaders.

Support for the Leader

A feature of ACT elections is that the party Leaders always poll more strongly than any other candidates.

The table below shows the percentage vote recorded by party leaders at all elections since the introduction of Hare-Clark in 1995. You can sort the table by column.

With Wayne Berry in 1998 the only exception, 13 of the 14 election party leaders polled above 19%, the highest 36.9% for Jon Stanhope in Ginninderra at the 2004 election, the only election that produced a majority government.

Compared to this support for leaders, over seven elections, only 14 non-leadership candidates (10 individuals) have polled more than 14% of the vote.

The highest vote ever recorded by a non-leader was 17.8% by Labor’s John Hargreaves in Brindabella at the 2004 election.

The importance of leadership vote may have a role to play in one of the most hotly contested seats at the 2020 election, the battle for the fifth seat in Murrumbidge. (See below)

There are more sitting MLAs in 2020

The 2016 elections was the first for an expanded Legislative Assembly. There were five 5-member electorates compared to the former two 5-member and one 7-member arrangement.

With two retirements, that meant there were 15 MLAs seeking re-election and 10 vacant seats. Two sitting members (including one elected by casual vacancy) were defeated, producing a new chamber of 13 re-elected members and 12 new members.

In 2020, there are 23 sitting MLAs seeking re-election. Given the new electorates and MLAs have been in place for four years, there are many fewer vacant seats than in 2016.

This may have an impact on the results. With more members known to voters, party vote may be more concentrated with sitting member. More of the vote for each party will be with sitting members, compared to the more even spread of votes in the open contest of 2017. This especially applies to Murrumbidgee.

How Strong is the Liberal Vote in Murrumbidgee?

In the list of Leader’s votes, one of the highest was for the Liberal Party’s 2016 leader, Jeremy Hanson. He polled 22.4% of the vote in Murrumbidgee at the 2016 election, more than half of his party’s ticket and much higher than the second finishing Liberal candidate, fellow MLA Giulia Jones on 7.2%. Hanson’s vote was much higher than at previous elections.

The expansion of the Legislative Assembly at the 2016 election made Murrumbidgee a very odd contest. There were two sitting Liberals MLA’s, Hanson and Jones, but no sitting Labor MLAs and no sitting Green.

In 2020 the contest is different. Hanson and Jones are re-contesting, but Hanson is no longer party leader. Labor also has two sitting MLAs in Chris Steel and Bec Cody. The Greens have an MLA in Caroline Le Couteur, though she is not re-contesting.

Now that Labor has MLAs, will its vote be boosted? And with Hanson no longer having the profile of a party leader, will this diminish the total first preference vote for the Liberal Party?

Saturday night will tell, but the close race that appears evident from analysis of the 2016 result may be a consequence of the Liberals being the only ticket with MLAs in 2016.

A strong vote for a party leader is usually good news for other sitting party MLAs in the electorate. Distributing a leader’s preferences tends to heavily favour fellow sitting MLAs.

And a final note on Murrumbidgee. The Australian Climate Change Justice Party has nominated a full ticket of five candidates in Murrumbidgee. I don’t know a lot about the party, but they do not appear to be allies of the Greens. Will their presence on the ballot paper take away votes from the Greens? And as the party is standing five candidates, how many Climate Change Justice votes will exhaust at the end of the party’s ticket? It could be important in the Green’s attempt to win the final seat in Murrumbidgee.

Will Alistair Coe get a Leadership Boost in Yerrabi?

Liberal hopes of gaining a seat in Yerrabi may depend on the boost to the Liberal vote from the higher profile of Alistair Coe produced by four years as Liberal Leader.

A leader who can attract a big vote assists a party as all or a part of the vote stays with the candidate and therefore in the party ticket, even if further preferences would take the vote elsewhere.

Another advantage for the Liberals in Yerrabi is the retirement of Labor’s Meegan Fitzharris. With 15.2% the vote in 2016, Fitzharris recorded the highest vote for any non-leadership candidate at the 2016 election.

Another issue in Yerrabi is that Meegan Fitzharris was replaced at a re-count by Deepak-Raj Gupta, who finished fifth on the Labor ticket in 2016. So in 2016, Gupta did not attract many votes into the Labor ticket, or rate more highly than other Labor candidates.

Liberal Candice Burch faces the same problem in Kurrajong. She was the third placed Liberal elected in 2016 and entered the Assembly at the re-count following the death of Steve Doszpot.

The re-election record of candidates elected at re-counts is mixed. There have been 11 casual vacancies filled by re-count since Hare-Clark was introduced.

Of those 11, six saw the new member re-elected, four were defeated, and one did not contest the next election.

Hare-Clark is often spoken of fondly by its advocates for allowing voters to change who is elected from a party ticket. That tends to happen most often with members elected by re-count, which is why it is worth watching the fate of Deepak-Raj Gupta and Candice Burch in 2020.

The Prospects for Independents and Minor Parties

In the lead-up to the ACT election, a constant refrain on-line was the need to elect minor parties and independents. In the end, few have a realistic chance of election.

It surprises me how few minor parties nominated candidates with any public profile. The Shooters, Fishers and Farmers Party nominated two candidates in each of the five electorates, but none has any presence on the internet. Other parties have given more information on their candidates, but few are well known.

The one exception is the Belco Parrty contesting Ginnenderra. It includes former Ginninderra Liberal MLA Bill Stefaniak, who as I noted earlier, is the only non-leadership candidate to three times poll more than 15% of the vote. Also on the ticket is Chic Henry, who polled 6.6% on his own in Ginninderra in 2012 while standing for the Motorists Party.

With the retirement of long serving Liberal Vicki Dunne, the Belco Party is offering an alternative in Ginninderra, but one that might hurt the Liberal Party. We will see on Saturday night how the parties poll.

The major parties stand five member tickets and the flows of preferences out of their tickets is small, even when a final candidate is excluded.

Parties that nominate with fewer than five candidates produce more preference flows to other parties as voters comply with the ballot paper instructions to give a minimum five preferences.

But those preferences tend to stop rather than flow on to all minor parties on the ballot paper.

It is the same situation that minor parties face in the reformed Senate system. Under group voting ticket, every vote captured by a minor party entered the pool of preferences to be swapped. In the old Senate system, it was in the interest of minor parties to have as many minor parties as possible on the ballot paper, to confuse voters and to attract more votes into the pool of votes to swap around by the practice that became known as preference harvesting.

It is the opposite under the new Senate system and under Hare-Clark. Splitting vote across multiple parties is self-defeating because preferences exhaust.

The Liberal Democrats could cause confusion with the Liberal Party in Brindabella and Ginninderra, but in both electorates the two parties are in adjacent columns.

Despite the hopes of many on-line posters, on Saturday night it is likely that all 25 seats will be won by Labor, Liberal and Green candidates. The only other party that looks to have a realistic chance of electing a member is the Belco Party in Ginnenderra.

(On a note of explanation for non ACT readers, Ginninderra is based on the Belconnen town centre in north-west Canberra, hence the abbreviation Belco.)

p.s. – Check out my full ACT Election guide at the ABC Elections website. And don’t forget to watch the ABC coverage on Saturday night, starting at 5:30 eastern time on the ABC News channel.